On 20 October 1880, Frankfurt celebrated a long-awaited event – the opening of its own opera house. Visitors came to feast their eyes on the brand-new auditorium designed by Berlin architect Richard Lucae, which could seat 2010 people.

Under the management of the first artistic director, Emil Claar, and the first musical director, Felix Otto Dessoff, the concert hall – situated on Scherbius- und Andreae'schen Platz on Bockenheimer Landstrasse (today’s Opernplatz) – was opened with a performance of Mozart's opera 'Don Giovanni'. Among the honorary guests was Kaiser Wilhelm I, who, having toured the building, said to Emil Claar, "I could never allow myself such a building in Berlin."

It was Dr Daniel Heinrich Mumm von Schwarzenstein, the Lord Mayor of Frankfurt, who had first suggested building a new theatre at a meeting of the City Council 11 years before. "Frankfurt lacks a theatre which reflects the size and status of the city and meets the demands of good taste," he declared. However, it was 67 prosperous citizens of Frankfurt pledging a total of 480,000 guilders (about 10 Million Euro) for the proposed new building which really marked the beginning of the project. Over a period of more than seven years, a building 34 m high was constructed on a site measuring 4,000 m2. Its appearance bore the hallmark of the famous architect Gottfried Semper and the Renaissance-style design based on Greek influences which he had developed. Richard Lucae himself did not live to see the completion of the work, since he died five years after construction began.

By the time it was destroyed towards the end of the Second World War, the Alte Oper Frankfurt had had eight artistic directors, staged numerous premières and welcomed many world-famous soloists and composers. It staged the latest operas by Wagner, and its programmes featured leading names including Bizet, Leoncavallo, Puccini, Mascagni, Smetana, Richard Strauss and Humperdinck.

The Alte Oper Frankfurt had escaped the First World War with only slight bomb damage to its façade, so its destruction towards the end of the Second World War was all the more tragic. During the night of 23 March 1944, the Alte Oper was completely burned out, and sections of its roof collapsed entirely. It was not long before the decision to rebuild it was taken. A call for donations urged people to "Save the Alte Oper", and enough money was raised to allow the building to be made safe in 1952, rescuing "Germany's most beautiful ruin" from demolition. However, the dedicated efforts of local people to rebuild the Alte Oper were rejected by the city authorities at first.

It was 12 years later that an organisation called the "Action Group for the Alte Oper of Frankfurt am Main", one of the first citizens' action groups to be set up in the Federal Republic, managed to drum up immense support among local people and businesses, quickly winning the backing of the city fathers. Artists and intellectuals such as Thomas Mann, Paul Hindemith and Otto Hahn also supported the initiative. Fritz Dietz was the founder and first chairman of the organisation. As president of the local chamber of industry and commerce, he unwaveringly pursued his objective of bringing a piece of Frankfurt's tradition back to life. "This opera house is a piece of Frankfurt's cultural history and demonstrates that this city should consist of more than just large modern business premises," he said. In 1976, Frankfurt City Council, led by Lord Mayor Rudi Arndt, gave the go-ahead for the reconstruction of the Alte Oper. During his time in office as Finance Minister for Hesse, Rudi Arndt had still been in favour of demolishing the ruins - a proposal that had given the politician the nickname "Dynamite Rudi". He believed that constructing a new building to the original plans would be a more financially sensible approach.

By late 1972, the Action Group had managed to raise DM 11.5 million through fundraising events ranging from raffles to gala concerts given by the Berlin Philharmonic Orchestra conducted by Herbert von Karajan. Some of this money was immediately spent on urgent work to make the external walls safe. In total, the Action Group collected donations in the amount of 15 Millionen DM.

The Alte Oper is reborn

The continuation of the building work on the ruins was overseen by a working party made up of the City Council and the Action Group, and plans were drawn up for a new building offering "multifunctional" facilities. The designs produced by architects Braun and Schlockermann incorporated an all-new interior for the building behind a historic façade, the idea being to create a building which would meet the technical requirements of both a concert hall and a cutting-edge conference centre.

The rectangular Great Hall was expanded to provide seating for 2,430 people, leaving the foyer and the vestibule as the only parts of the Alte Oper still resembling the original design of Richard Lucae. Unfortunately, the new design could not incorporate the sumptuous imperial staircase. The new plans included flexible foyer areas for exhibitions, art auctions, sales and the like, as well as a second, smaller concert hall, the Mozart Hall, seating around 720 people. The costs for the construction of the modern concert hall and congress center amounted to 200 Millionen DM at the end.

In December 1978, the topping-out ceremony marked the completion of the main external reconstruction work on the new Alte Oper. Whilst the preserved or restored decorations, reliefs, medallions, frescoes, tiles and mosaics were being reinstated inside the building, thousands of Frankfurt residents gathered on Opernplatz in August 1981 to watch the Pegasus statue being lowered onto the roof, the final step in the cleaning and completion work on the façade. A few days later, on 28 August 1981, the Alte Oper Frankfurt was officially reopened. Following an opening ceremony attended by the then Federal President Karl Carstens, the Frankfurter Opernhaus- und Museumsorchester conducted by Michael Gielen played Gustav Mahler's Symphony No.8. 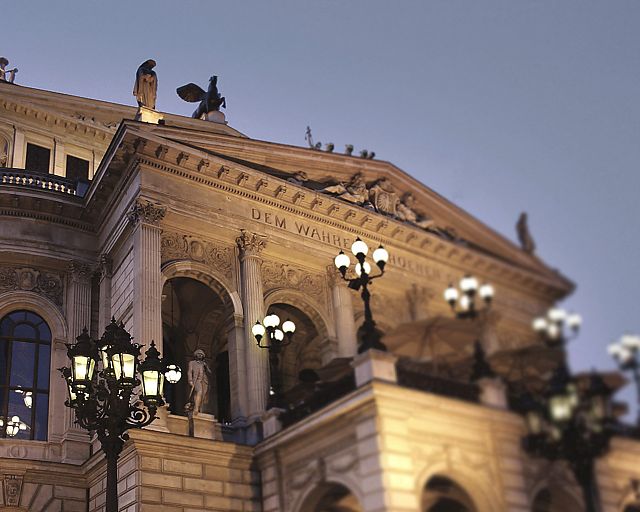